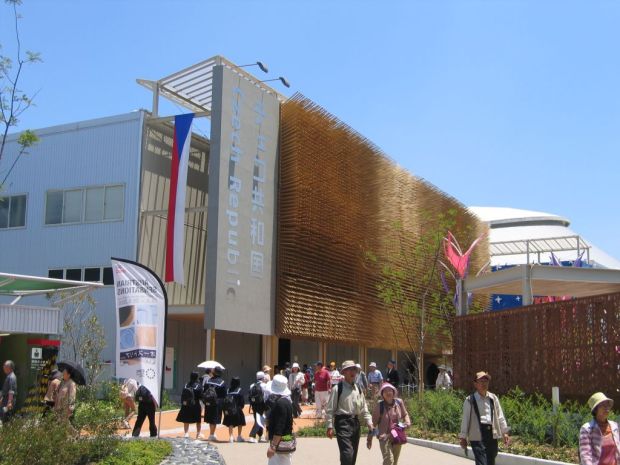 This time the shape of the pavilion was the same for all countries (consisting of one to four modules) with the only differences in the facade and the interior. The facade, designed by Architect Barbora Škorpilová, consisted of 20,000 wooden bars. This created an organic feeling of a fur or prickles, corresponding to the main theme of the exhibition - Nature's Wisdom.

The interior was dominated by the exhibition called "Garden of Fantasy and Music" by a team of young artists headed by the painter Petr Nikl. The exhibition also included projection of three animated films by Jiří Bárta, Michaela Pavlátová and Pavel Koutský. Jak Hřebejk, the dramaturge of the cinema section, commented on his approach as follows: “When I was asked to appoint a creative team for the exhibition of the Aichi pavilion for EXPO 2005, this is what appeared in my mind: What can I boast of on behalf of my country in front of Japanese, or anybody from abroad? What product of today, original but at the same time springing from tradition, is able to speak a universally understandable language? One of the characters of my favourite film Smoke by W. Wang and P. Auster says: "You can never understand life unless you slow down a bit." Isn't this the essence of understanding the wisdom of nature and the art of life - for a 21st century man?"